How to Develop Powerful Past Performance References

Past performance is one of the most important aspects of a proposal, but too often it's not given the attention it deserves.

Learn how to develop strong past performance references that mirror the scope of work in the RFP and help you score higher.

Listen to the episode below. You can also listen on Apple I-Tunes or Soundcloud.

Keys to Winning · How to Develop Powerful Past Performance References

Ray Thibodeaux: Some say past performance is one of the most important aspects of a proposal, but too often it's not given the attention it deserves. To talk about that is our very own Ellen Perrine, a more than 25 year veteran of proposals who has become a past performance specialist. Hi, Ellen, thanks for being on the podcast.

Ellen Perrine: Thank you for having me Ray.

Ray Thibodeaux: Ellen you seem to have taken past performance to an art form, and I want to talk to you about how to do it but first lets make sure everyone knows what we mean by a past performance section of a proposal. As opposed to say corporate experience. Will you talk about that?

Ellen Perrine: Sure. Corporate experience is more of a narrative that concerns the company's history in the market place and all of the capabilities that they have. Obviously with in answering a proposal they're going to highlight more of the corporate experience that directly relates to the RFP in question. But, nonetheless it's more of a narrative and it's a general expose on what they bring to the table as a company.

Ellen Perrine: And it also will include significant past performance references. For example, they may talk about all these federal agencies that they have performed work for and may have some kudos where they rolled out the first ever sophisticated network for something or implemented a new software process that reduced cost in customer service. They will talk about everything kind of generically, and then past performance itself, is a choice of usually three to five references that directly mirror the scope of work that the RFP is requesting.

Ellen Perrine: The importance of that is that those references are specific contracts. So they're contract related, you need to provide all the contract details, you need to provide an over view of the project and you need to tailor that to what you're going to be performing on the new contract. Failure to do that makes it difficult for the government to determine relevance. So both of those things can make up your whole corporate experience and past performance history, but the one that's really important as far as I'm concerned is the actual past performance references that you're citing- for the contracts your citing that shows that you can perform the work.

Ray Thibodeaux: Will you give us your formula for putting together a past performance reference? What are the elements that you try to include?

Ellen Perrine: You need to include all the contract information that's requested by the government because they will most likely either request a past performance questionnaire or they will call your contacts to verify your past performance. You want to have your contact information absolutely correct with the phone numbers correct. Then you need a really good, hard hitting, summary of the scope of work that you've performed on that contract and you need to tie it in the introductory paragraphs to the type of work that you're going to be performing on the new contract.

Ellen Perrine: The closer you can tie to all elements in the scope of work, the better your score is going to be on past performance. It has to be easy, that's why you number everything and make it easy for them to find. You don't have to write a lot but you have to use the right buzzwords so when the government looks at what you've written, they can tie it to what they're asking for. That's the big thing.

Ray Thibodeaux: Here's one of the reasons I refer to the hidden powers of past performance, you once mentioned that a good past performance section can ripple through other parts of the proposal, can you elaborate on that?

Ellen Perrine: Well, I think that if you put it in past performance, and it can be easily grabbed by the people who are writing other sections of the proposal it actually helps them populate that with hot boxes. You can use hot boxes in your past performance, I see no reason why you couldn't do that. You probably want to make things different within past performance versus the items that you chose from maybe your technical and management approach just to kind of break things up and cover all the bases.

Ellen Perrine: To the extent that you can fill those sections in with particular statistics, you know we completed 30 days ahead of schedule, we reduced costs by 20% in the first six months, those things are definitely helpful. Like I say, if you have enough of them, they can be populated to other sections of the proposal and help your technical and management approach teams out.

Ellen Perrine: As I mentioned about gathering metrics of statistics in areas where you have clearly out shined your competitors and won this contract. You can provide information on significant accomplishments in the contract that can be used to support the management or technical sections of the proposal. For example, if you're installing a wide area network, and the technical section is going to require you to install another one, you can talk about the industry best practices that you use to install it and also the results in the lessons learned that you gained from installing the previous one.

Ellen Perrine: Which will then give the government confidence on this proposal that you really are bringing a lot of prior knowledge on how to perform this work with you. That's where you can use it most effectively is taking those issues out of your past performance where you've clearly outshining your competitor and demonstrate how you'll bring that knowledge to the work that you're going to be doing for them, and it will give them a sense of confidence, and that's what you want.

Ray Thibodeaux: Let's say an RFP asks for up to five contract past performance references with in a set time frame. Say you have three references that are strong and you have two that are pretty weak and you don't want to include them, how bad is it in terms of the evaluation to not include five references when given the opportunity?

Ellen Perrine: Well, typically if you have three to five contracts, some of the contracts may not have all of the elements required by the statement of work but if you can identify all the elements across your three to five contracts. I think that's fine and if the one that has some SOW points missing, you can still, within a side scope and complexity for the most part, I think it's definitely relevant. If you have something that totally irrelevant ... for example small businesses sometimes don't have three past performance references of the same type.

Ellen Perrine: Let's say they perform an audit one day they perform a strategic plan one day then they do some kind of minimal business process re-engineering type project, somebody who's looking for a really strong strategic planning company is probably going to look at those three references and say, but you only have one. So that tells them that they don't have experience in successfully repeating the type of work that the government is working for. So, that's the other extreme where they don't quite match up.

Ellen Perrine: One of the tricks I use aside from having a knowledge management system where you keep all your past performance in one place and you can refer to it, you can find it easily and then customize based on the boiler plate that you have and then any requirements and then put what's the same and then go looking for the new things. You want to have everything put into a knowledge management system that you can pull easily.

Ellen Perrine: The other thing I do is when I'm doing past performance and I'm trying to really match a contract to a specific statement of work a lot of times the best way to get that is to talk to the program manager on the project that you're using as a reference. Create a series of questions for that project or program manager to answer and say, okay, the new contract requires you to do this. Do you do this on your contract, on your current contract that you're managing? Or do you have something that's an equivalent? I interview them and I type up a series of notes.

Ellen Perrine: So that when I develop the past performance reference I have a document that tells me the most salient points in the past performance of the company that I just interviewed for them on their ongoing contract. I would archive that as well because that really helps you know quickly when you read it at a glance those summaries, what really is going on with that contract. Because a lot of times the past performance person is not proving to those contracts and they're stuck until they talk to somebody.

Ellen Perrine: They need a subject matter expert. I recommend involving the project or program managers early on, getting the new requirements out in front of them and saying do you need this? If you don't need it, what kind of equivalent product or service are you offering? Because sometimes you can dance around the fact that you don't do everything in one of these SOW areas but you have an understanding of it and you have done something similar that will allow them to believe that in fact you could perform if you had to. And that's what I do. And I would archive those. You need a good knowledge management system and you need summaries from the project or program mangers working those specific contracts today.

Ray Thibodeaux: Thank you Ellen for being on the podcast.

Ellen Perrine: You're welcome, I enjoyed it.

Ray Thibodeaux: I'm Raymond Thibodeaux and this has been keys to winning from AOC Key Solutions Incorporated. Or KSI a consulting firm that has helped companies across the country win a billion dollars in federal contracts. Learn more at www.AOCKeySolutions.com or follow us on Linkedin. Be sure to subscribe for more podcasts from this series and thank you for listening. 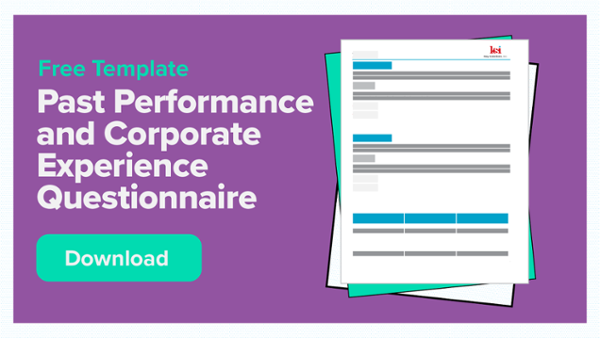 Getting Your APMP Certification