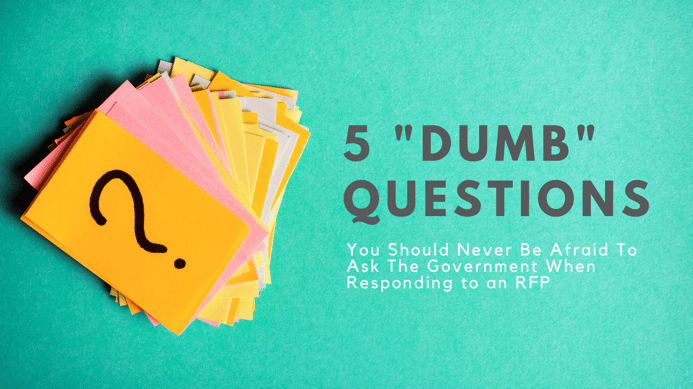 We've all heard the phrase there is no such thing as a dumb question. The fact is, even a seemingly obvious question can elicit a helpful and sometimes surprising response by the Government.

I’ve seen many a proposal writing team guffaw at some of the questions submitted by other offerors during the Government RFP response process. Still, I’ve been pleasantly surprised by some of the government’s answers to these so-called "dumb" questions.

Here are a few examples:

1. "The proposal requires a Past Performance Questionnaire for each project reference. Can we submit completed PPQs from a recently submitted proposal for a similar project?”

2. "An executive summary addressing key elements of our proposal isn't required in the Request For Proposal (RFP), but may we submit one anyway?”

The government said yes, followed by an amendment to the RFP adding an executive summary to Section L requirements.

3."Can the government provide the wording for the letter of commitment to be signed for subcontractors?"

The government said yes. Contracting officers often supply the wording for commitment letters. When they do, use their exact words and don't waste effort rewriting or embellishing. Too risky

4. "Section L proposal formatting requirements say to use the 12 point Times New Roman font for the proposal, but may we apply a different typeface for graphics and tables (minimum 8 pt Arial) for improved readability and visual appeal?"

5. More a request than a question: "We strongly encourage the government to extend the proposal submittal due date by two weeks to account for the upcoming federal holiday and allow offerors reasonable opportunity to respond effectively in a timely manner."

The government granted a two-week extension, but it’s hard to know whether the contracting officer was headed there already. Extensions almost always come as a relief to beleaguered proposal teams, but the downside is that struggling competitors have a chance to catch up.

Make sure someone edits the questions before they’re submitted. One offeror submitted their request with the preface, “Do we want to ask for an extension?” The question likely was intended for the proposal team manager, not the government, which decided not to weigh in on it.

Some questions are just so bad they’re good, like one that showed up in a Q&A for a multi-million-dollar construction bid: “We are a new architecture/design company and we have never submitted a proposal for a federal government project. Will you provide us with an example of a good proposal?” As you may have guessed, the government’s answer was, “No.”

Has your proposal team ever submitted a question and gotten a surprising response from the Government? Let us know in the comments!