So much about developing proposals to win a government contract, is the scaffolding, the process.

That's where large primes have a decided advantage. They often have "proposal factories" of their own with well-defined proposal processes and trained dedicated resources such as capture and proposal managers, technical writers, and graphics artists who can churn out proposals like Willy Wonka churns out Wonka bars.

Small businesses, being leaner, often don’t have that luxury. They seldom can support a proposals-only staff. They usually don’t have baselines for typical proposal items such as proposal management plans, technical approaches, and transition plans. They don’t have a database of past performance references that can be called up by contract type, period of performance, contract value, the scope of work, or any other relevant detail. When small businesses bid a government contract, it’s often an all-hands-on-deck affair. They pull staff from their day jobs to pitch in. It’s can get a little chaotic with no one quite sure of who’s doing what.

As proposal consultants, we've walked into situations where clients had limited government proposal experience and no reliable processes, and so helping them with their proposal included the task of helping them set up a maintainable process.

Here’s a practical to-do list that most large government contractors use to keep their proposals on the right track. It’s by no means a complete list, but it’s a very good start.

1. Integrate your proposal outline with a compliance matrix.

Even if your RFP doesn’t require a compliance matrix, do it anyway for your own sake (just don’t submit it with the proposal). This requires a thorough reading of the entire RFP, including attachments. The integrated outline/compliance matrix should include all relevant RFP references, whether it’s Section M evaluation factors or the Scope of Work or even requirements tucked away in other sections of the RFP. Of course, the outline should easily track to RFP Section L instructions. The outline/compliance matrix should include page limits or allocations for each section, proposal volume or section owners, and a column for comments/suggestions. It becomes the proposal playbook: who does what, where, and why.

2. Develop a realistic proposal schedule (back-timed from the proposal due date) that includes at least three formal proposal team reviews.

Give yourself enough time between reviews to integrate reviewer suggestions and edits, and sufficient time for finishing touches such as style consistency, the final placement of graphics, and front and back matter (TOC, list of exhibits, acronym list, etc.), which usually take more time than you think.

*The above sample schedule is taken from the KSI Advantage© Capture & Proposal Guide.

These usually are called “Morning or Daily Standups,” the idea being the meetings are so short you needn’t bother sitting down. The standups should at least include the “book bosses” (typically, the leads for the technical, management, pricing, past performance, and, when required, small business participation volumes).

The standups should include any RFP or capture updates, upcoming milestones, and proposal volume status. Keep it all very up-tempo, 20 minutes tops. More complex issues, especially ones that don’t concern the entire team, can be taken offline.

4. Use a document sharing and version control system.

SharePoint is one of the most common tools, but there’s also Privia, Google Docs, Box, and others. A document sharing and version control tool keeps the proposal development process communal, trackable, and transparent. Without it, too much time can be wasted as authors unknowingly work simultaneously on the same document, overwriting each other’s work or revising old content. The version control capability allows you to look back at (and restore, if needed) previous revisions

5. Storyboard each section before you start writing.

Use a pencil or chalk or dry-erase marker, nothing permanent. Storyboarding provides a good layout of what you want to say, and how your flow charts, highlight boxes, and other graphic elements fit within it. Use bullets, not sentences.

This process also allows you to more gracefully weave in your proposal’s win themes and discriminators, things that separate your company’s capabilities and experience from other offerors. Storyboarding is collaborative or should be, making it easy for other members of the proposal to weigh in on the content early on. 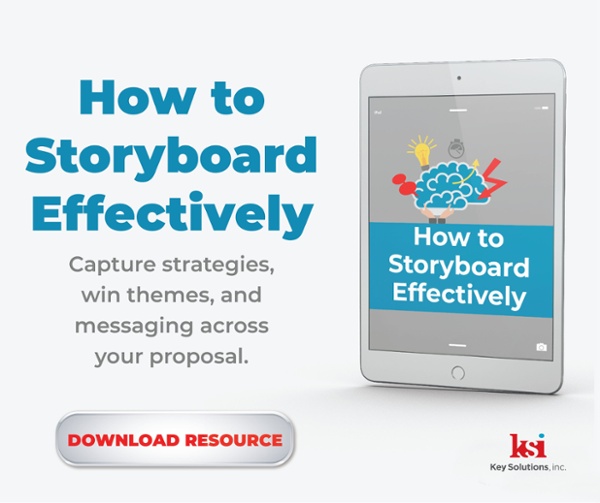 6. Create templates for each proposal section complete with headers (from the outline)

Include the relevant RFP references, just drop in the paragraphs in small text under the header. You can take it out in later drafts. It’s also good practice to include the relevant RFP references in brackets in the header. For example: “2 Approach to Program Management [L4.2, M.2.2]” focuses the writers on what they need to address in their sections, and it helps evaluators map your response to RFP requirements.

7. Use tracking numbers to identify every graphic—trust me, it’ll save time and confusion down the road.

Figure numbers change as proposal graphics are added or cut, but tracking numbers don’t—they’re like a thumbprint. A tracking number in a small, but readable font at the bottom right of each graphic lets you accurately identify your graphic to the graphics artist, and helps you archive and identify graphics for use in future proposals.

If you’re a small business, establishing these proposal processes can be daunting. But with just the seven to-dos listed here, you’ll be producing proposals in less time, with less confusion, and with fewer mistakes. All I Want For Christmas: A Proposal Writer's Wish List