Contract Lingo: A Guide to IDIQ, GWAC and BPA Contracts

So your company is hunting "big game" in the government contracting world? Well you are not alone.

The Federal Government, both defense and civilian, operate their procurement and acquisition needs off of hundreds of contract vehicles a day.

You may have heard of some of these vehicles: Alliant, OASIS, SEWP V, CIO-SP3.

But, how do you determine what type of large contract vehicle (GWAC, IDIQs, BPAs) is right for your company?

In order to demonstrate the massive spending on these vehicles, we took ten (10) well-known federal contract vehicles to explore their spending-to-date and who their largest government customers are.

To date, these ten (10) contract vehicles have spent over $51B on Government contracts. With all these opportunities and big dollars on the line, it’s surprising how few people take a step back and determine what type of large contract vehicle is right for you and your company.

Let’s take a look at the three most common types of large vehicles, what they are used for, who uses them, and why agencies prefer some over others.

Type of contract that allows an agency to purchase an undefined quantity/delivery over a set period of time. IDIQ’s are restricted to use within the awarding agency or sister agencies – meaning they are not “government wide” vehicles.

IDIQ’s are closed to new contractors until the contract expires which ranges from 3-5 years. The Government uses IDIQs when it cannot predetermine, above a specified minimum, the precise quantitates of supplies or services that it will require during the PoP.

Type of contact in which multiple Government agencies align their needs and purchase a contract for good and services. This type of contract allows for economies of scale in order to reduce per unit costs. GWACs consolidate purchases as opposed to having each agency enter into an individual contract.

A simplified acquisition method that Government agencies use to fill anticipated repetitive needs for supplies and services. Essentially, BPAs are like “charge accounts” set up with trusted supplies. BPAs are negotiated on an individual agency level, and generally only a small number of agency offices can place orders on them. BPA orders cannot exceed the simplified acquisition threshold of $150,000.

*BPAs sometimes are not considered as contracts according to GAO.

It is important to remember your large vehicle contract lingo when selling to any Government customer or end-user, as well as identifying the various dialects that every federal agency, defense or civil, speaks. It is hard enough to get your foot in the door and get 5 minutes in front of your prospect - so when you get your shot, make sure you are speaking the same language. 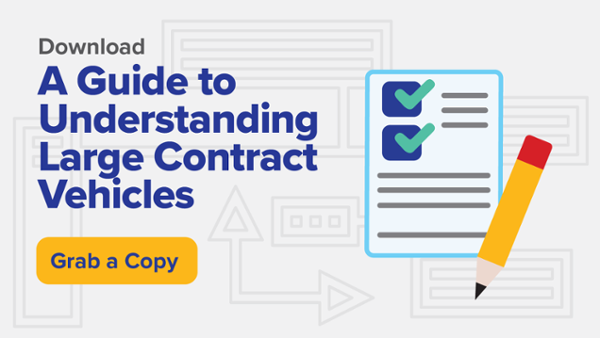 Amber Hart is a Proposal Development Specialist. She has experience with strategic proposal efforts to include proposal management, technical writing/editing and capture. How to Manage Proposal Color Reviews When You Lack Time