On May 23, 2017, the White House Administration released to the public part two of its FY18 budget named “A New Foundation for American Greatness.”

In summary, the FY18 “Foundation” Budget proposes to slash non-defense discretionary spending (NDDs) spending by $3.6T over the next 10 years and increases the defense spending $52B (~3% up from FY16) [1].

Without one concise budget document, and with White House and Congressional policies and priorities changing in real-time with every tweet, and with “breaking news” breaking every 5 minutes – it is time that we turn our focus back to the items that have a direct impact on us, the GovCon industry.

While a reprioritized budget, calls for Federal reorganization, and Federal workforce reduction are not earth-shattering concepts during a new Administration's transition into office, there are more factors at play today than in the past.

More than ever before, the Federal workforce is being worn down and planned programs and projects are being canceled as funding is bottlenecked and leadership positions are left vacant.

In this article using budget data I will be exploring:

Everything is on the table and the current impacts of the factors mentioned above are TBD.  In an industry where your strategy to scale and your growth lives and dies with Federal agency direction and mission, productive and driven CO’s, and a timely budget – uncertainty is not good. Let's take a look at the change orders. 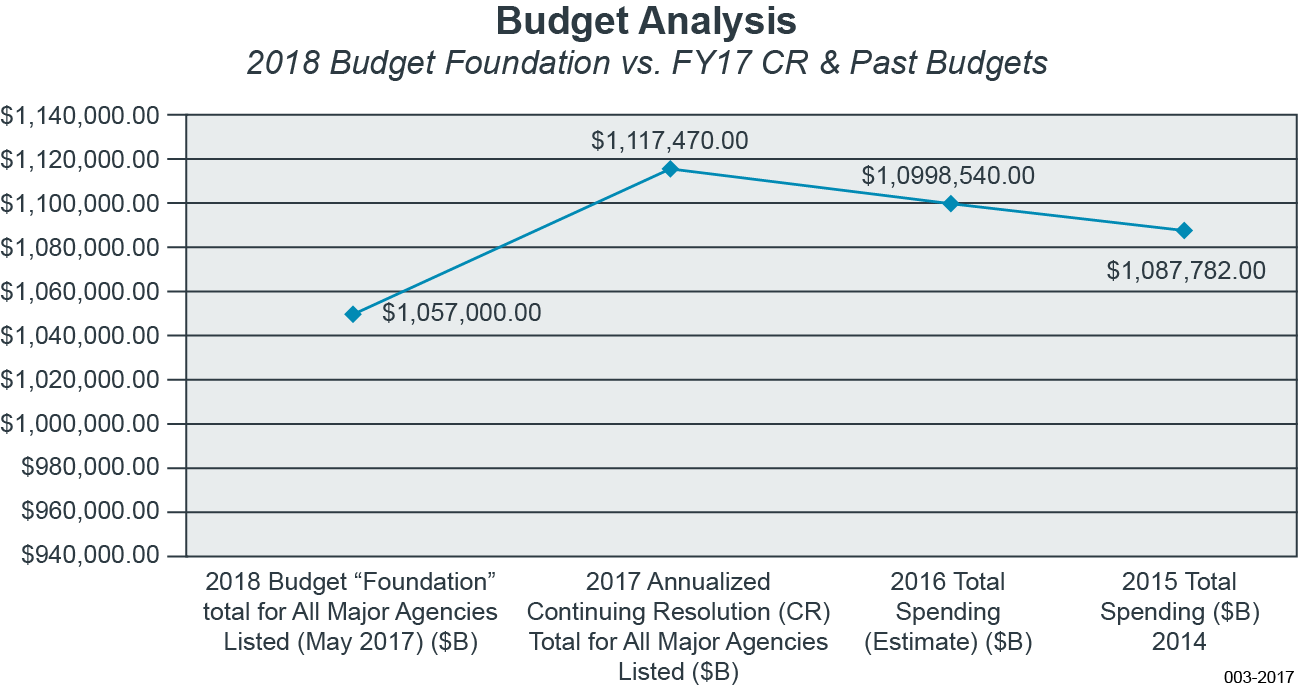 The most recent being the FY18 “Foundation” Budget, where the Administration lays out their goal to reprioritize and control Federal spending and streamline the Government by:

The Federal workforce is wearing thin because of several factors that have existed prior to this Administration, but are further exasperated due to the changing of the guard in the White House.

Factors such as being further stretched for resources, changing missions and unclear goals, lacking the required levels of leadership, and moving targets and changes in priorities and objectives.  This all while being tasked to evaluate, cancel, eliminate, and end programs and projects that they believe in – and doing “more with less” while working hard to get solicitations out the door. 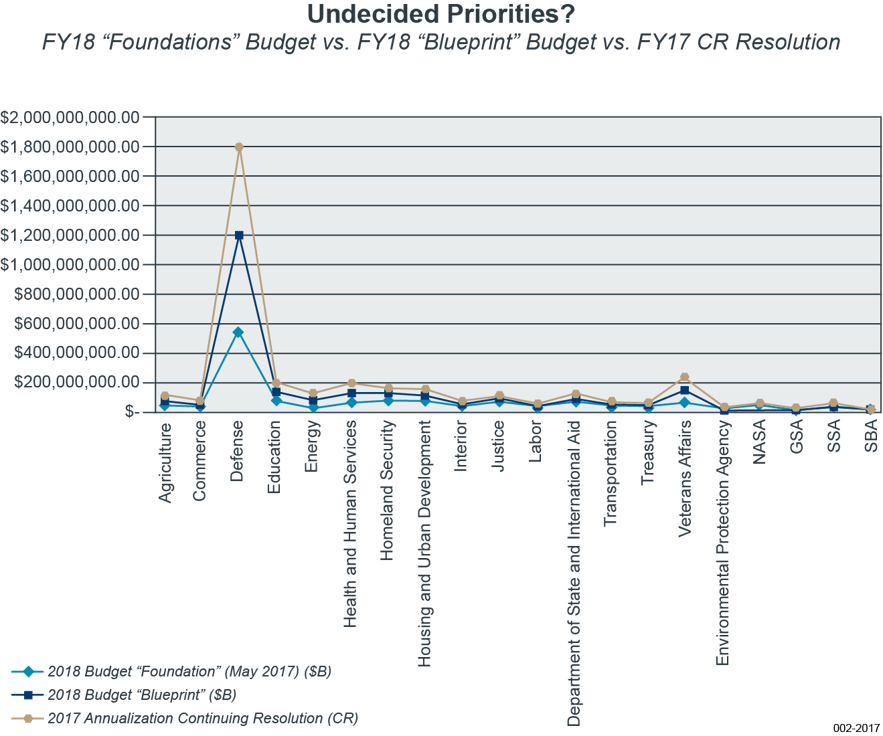 With all of this going on, how long can the GovCon community expect our Federal program partners and acquisition/procurement counterparts to put out meaningful RFP’s with actual intent and funding behind them, at a consistent pace and approach that is required for our organization’s growth?

The reality is with these factors at play, and the Federal procurement system needing an extreme makeover, we cannot expect it for much longer.

The GovCon industry is caught in an agile sprint cycle rather than a consistent state of work.

This has been caused by factors such as changing acquisition trends (GWACS or individual solicitations anyone?) and increased Government spending and awards over the past few years (Exhibit 1). As a GovCon organization, you signed up for this life, but this has been increasingly concerning as Federal agencies are forced to change and adapt their direction in real time with the ever-revolving door of objectives and concerns.

Evidence of the widening gap between the Federal’s undecided priorities can be seen when examining the measureable differences between the FY17 Continuing Resolution (CR), FY18 “Blueprint” Budget, and FY18 “Foundation” Budget as shown in Exhibit 2.  This is propagated when you compare Exhibit 2 to FY14 – FY16 total spending as shown in Exhibit 1.  If the numbers do not impress you, you can compare my notes on what is actually detailed in these three documents (FY17 CR, FY18 “Foundation” Budget) at the end of this article in the Summary Chart to see the inconsistencies.

As the GovCon marketplace rapidly evolves, these key issues and impacts are being felt across the industry and further widening the gap.

Programs and solicitations are being  “pushed right,” or continue to be extended for over a year (example, Veterans Affairs Community Care Network RFP), or cancelled in their entirety prior, during, or after the proposal phase. This bait and switch has been on the rise over the past 3 months and is equally frustrating to GovCon and the Federal workforce as it wastes time, limited resources, and money. Examples include:

At-Risk Construction and Preparing for Impact:

To appreciate the possible implications, we need to assess the FY18 “Foundation” Budget in conjunction with the Administration’s tax proposal.  The Administration’s aggressive tax proposal is likely cutting taxes on wealthy earners and large corporations thus causing the Federal Government a major loss in tax revenue leaving an unbalanced budget. 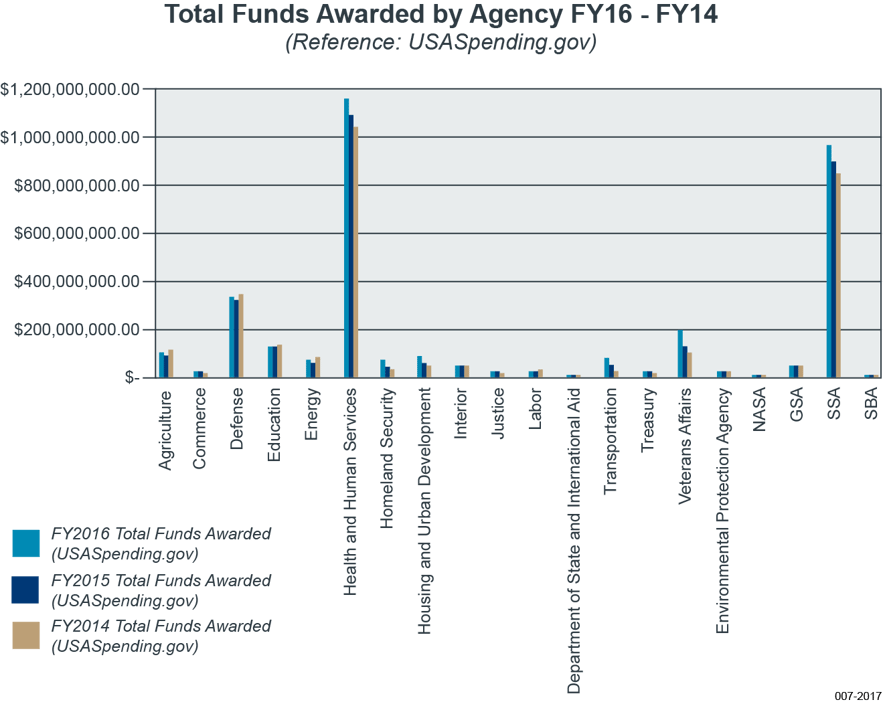 The loss in revenue for the Federal Government from these tax cuts will need to be balanced out by cuts in Federal spending and funding, thus impacting GovCon because there will be fewer opportunities to work with the Government in the future.  In other words less money, less contracts. With funding cut across the board for NDDs, agencies will have fewer contracting dollars to give towards your organization for new awards as well as potentially funding awarded contracts that you are executing on now.

Simply put, the potential for impact is great.  The Federal Government would be smaller, more opportunities will be pushed to State and Local Governments, and there will be less money for GovCon contracts.

Funding for NDDs is on the chopping block in the FY18 “Foundation” Budget, and will be for the next 10 years if the budget is passed as is.  This wholesale triage of a vast array of Federal activities will have consequences and will potentially influence already awarded funds, which have increased significantly from FY14 to FY16 as shown in Exhibit 3 and Exhibit 4.  Multiple programs across NDDs would be eliminated in their entirety or vastly downsized, thus canceling or terminating contracts that have already been awarded to GovCon organizations. This is of course, unless you are doing work in the national security and defense sector.

Re-Calibrating Your Value Analysis and A Call to Action:

With hot button headlines and priorities and policies playing out in real-time (sometimes in 240 characters or less) the GovCon industry must constantly update their memory bank and knowledge of the political agenda as well as the Federal landscape. This is critical to not only opportunity identification, capture, and strategic growth plans – but is also key to successfully executing on current programs.

The GovCon industry will need to responsibly assist our local and Federal counterparts in generating ideas and developing innovative yet realistic solutions to the problems they face.  We are able do this through the use of various methodologies and tools such as intentional bidding, unsolicited white papers, and building improved relationships between industry and State, Local and Federal Government.

A path of undecided priorities is evidenced further by the House Republican’s push to move forward with an omnibus bill to fund all Federal agencies for FY18 rather than go through “regular order” of 12 distinct funding bills.  However, both House and Senate panels have just started holding appropriations hearings this week and are well behind schedule, which not only puts an omnibus bill dream out of reach, but also risks the achievement of annual spending bills by September.

It is important to keep in mind that the annual budget proposal is just a proposal.  Congress has the ultimate say in funding and priority decisions, which may or may not be different than the budget proposal as is evidenced by the difference in FY17 CR and the FY18 “Blueprint” and “Foundation” Budget shown in Exhibit 2 and the Summary Chart below.

Now It's Your Turn:

Thank you for reading this analysis.  I encourage you to please share in the comments below if and how your organizations have been impacted by shifting federal priorities and cuts recently.

The Summary Chart below summarizes the FY18 “Foundation” and the FY17 CR Focus Areas in order to demonstrate the differences in priorities.  To take this a step further, you can also compare this summary table to the previous summary table created when the FY18 “Blueprint” Budget was released back in March. 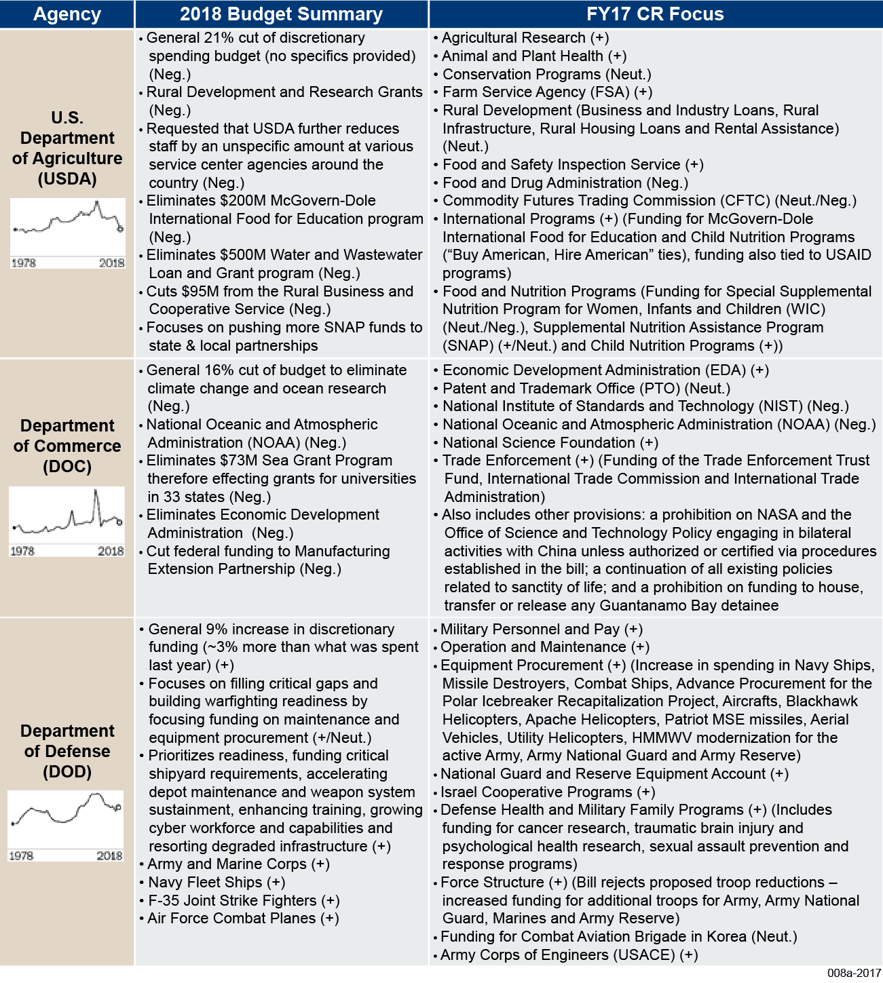 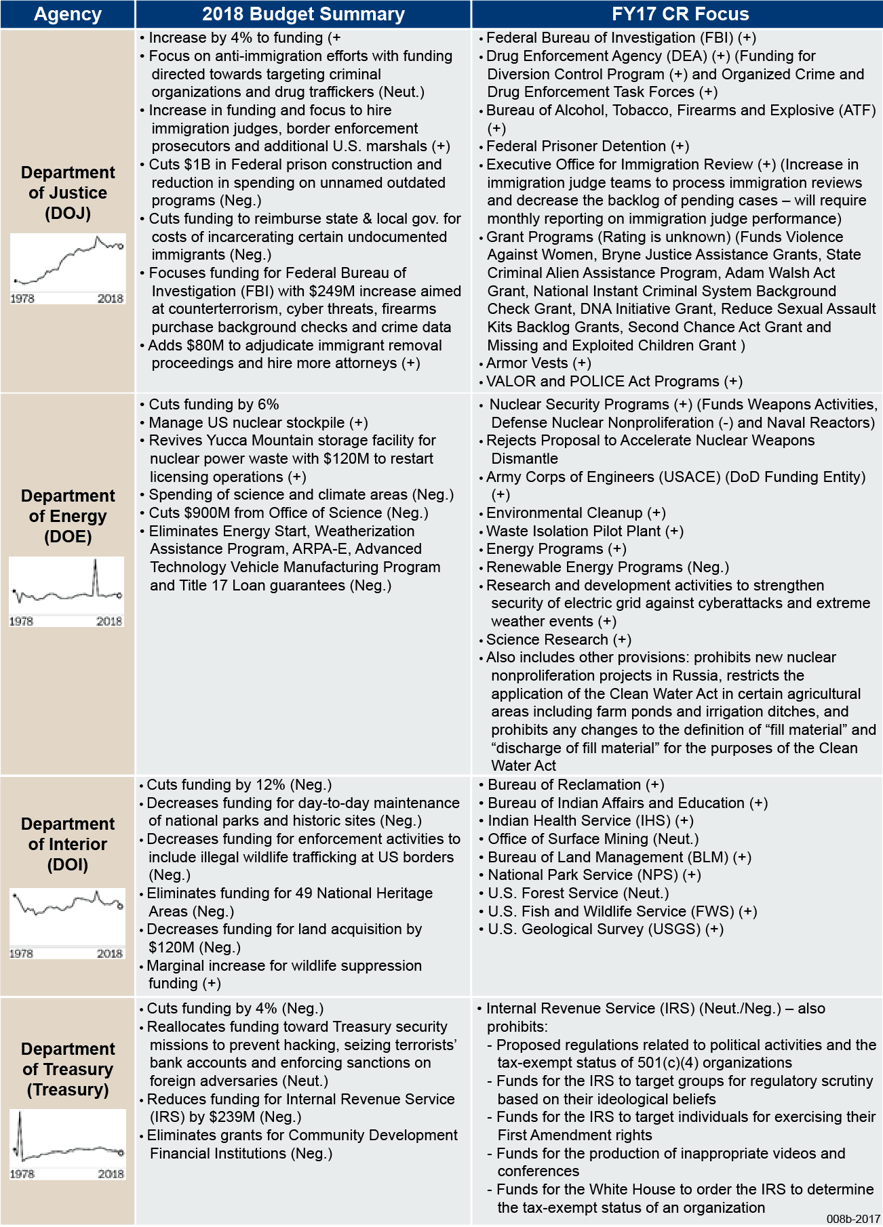 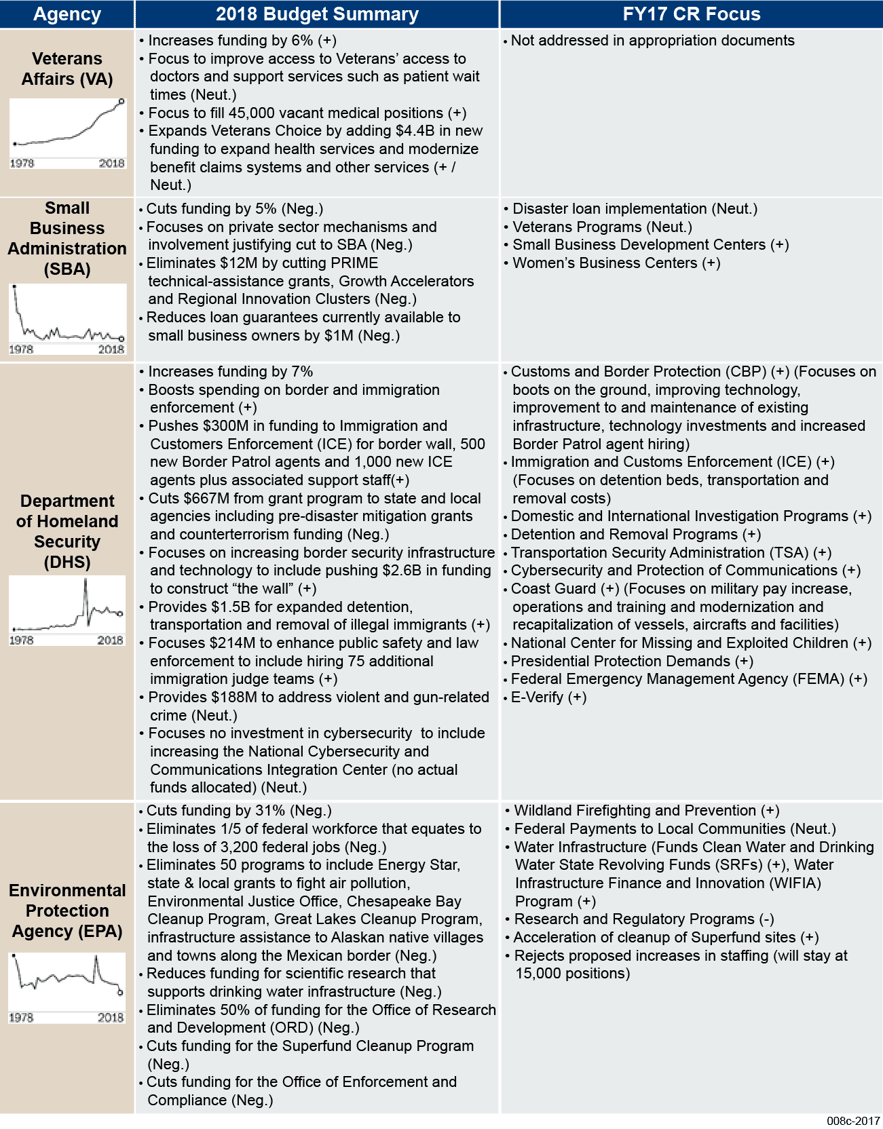 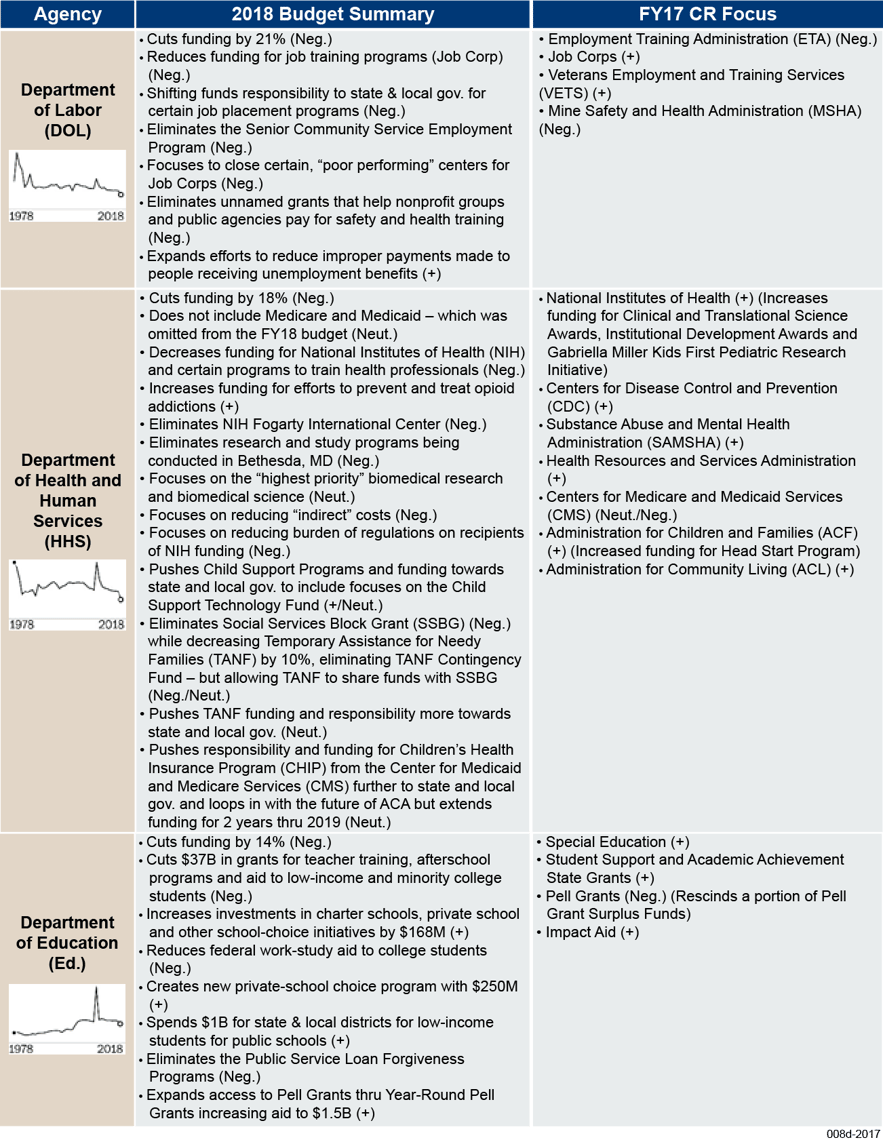 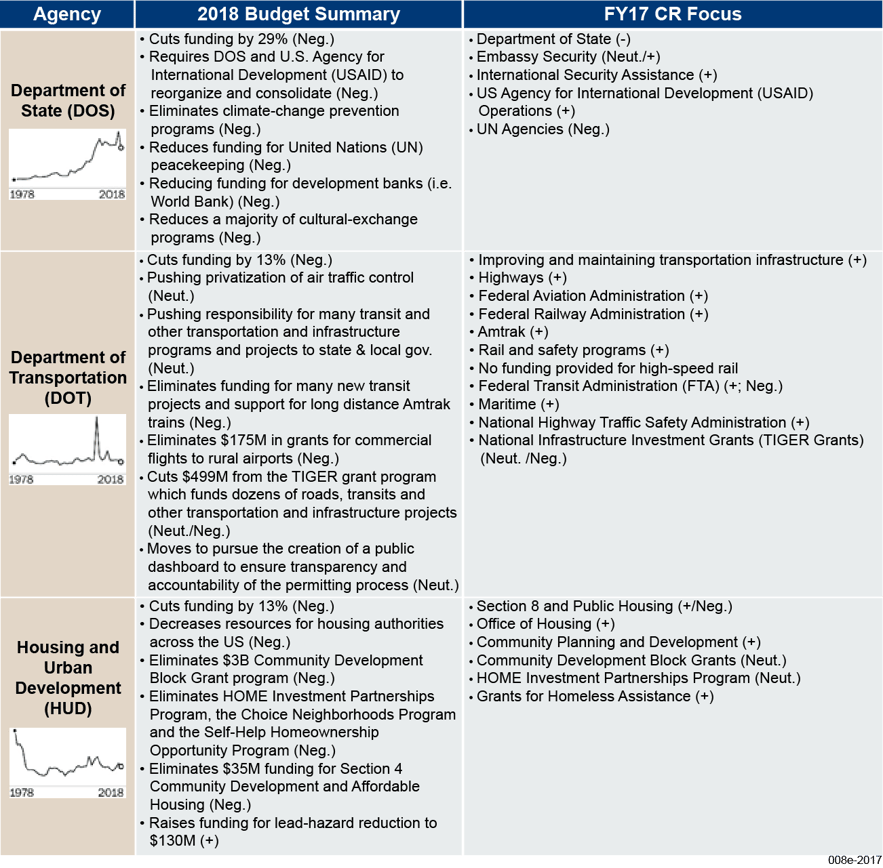 [1] One of the ways President Trump’s budget claims to balance the budget over a decade, without cutting defense or retirement spending, is to assume a $2 trillion increase in revenue through economic growth.  This is the magic of the still-to-be-designed Trump tax cuts.  However, wait — if you recall, the magic of the Trump tax cuts is also supposed to pay for the Trump tax cuts.  Therefore, the $2 trillion is a double-counting error.  When Treasury Secretary Steve Mnuchin was asked about this at the Fiscal Summit, he said this was a “preliminary document [referring to FY18 “Foundation” Budget] that would be refined,” as reported by David Wessel of the NY Times.

Amber Hart is a Proposal Development Specialist. She has experience with strategic proposal efforts to include proposal management, technical writing/editing and capture.

How to Write Effective Resumes for Federal Proposals