I recently came out of a project where we supported the client in submitting 25 task order proposal responses between two months.

The responses were spread across four different indefinite delivery indefinite quantity (IDIQ) vehicles and spanned two major delivery sectors. It had been quite a while since I had worked on this high of a volume of proposals requiring such quick-turn responses. And this made me realize that a key skill that I boast in my LinkedIn profile—the capability to manage multiple projects with tight deadlines—is one I have not tested in quite a while.

In this article, I outline some of these key differences.

More than any other skill, juggling a high volume of proposal responses, each with different team members and deadlines, requires organization.

With 25 task orders come 25 questions deadlines, 25 proposal templates with outlines, 25 review cycles, 25 compliance checks, and 25 finalization efforts. These were spread across roughly 8 weeks with 40 workdays—and as is normal with the Government, we didn’t know about all 25 task orders at the start of the assignment. This was an exercise of juggling steady releases and assignments as the Government issued a fairly steady flow of RFPs.

Because of this, our status tracker became critical. This simple spreadsheet made sure we didn’t miss any deadlines, allowed us to understand the progress of each effort in case one of us had to step in and help at any point in time and enabled us to understand who was supporting which effort at any point in time. This tracker also allowed us to pinpoint bottlenecks—days where multiple efforts were due at the same time—so that we could stagger the deadlines with our teams.

Time management was also key. We had to learn how to best use our time to set our teams up for success. Quick turnarounds of the proposal templates were so important—this enabled each of the proposal teams to review the requirements early and gave them time to track down information that may not have been readily available in boilerplate or recent reuse materials.

Being able to shift focus was another critical skill. If a draft iteration came in early, I found it helpful to start revisions on that draft, even if I was waiting on something of higher priority (e.g., a response due the next day). This enabled us to get ahead of the curve on some efforts and made the finalization process much faster on those efforts since only the part of the proposal needed to be cleaned up. Often times I could turn those drafts around before the other materials I was waiting on came in.

However, if the priority document did come in, it was important to be able to shift focus to the priority effort. Being able to manage the workflow in this way enabled my teams to successfully juggle their deadlines and meet the tight deadlines we were facing.

As a rule, it's not a good idea to rely solely on boilerplate content; however, solid reuse material is absolutely critical for task order proposals.

With task orders, much of the high-level statement of work is frequently repeated verbatim from one task order to the next. When this is the case, it is so helpful for the team to have task order templates that are pre-populated with boilerplate content that addresses these items, with placeholder headings for the specific tasks that tend to change from task order RFP to task order RFP. Highlighting the elements that should change from response to response (e.g., program name, customer name, site locations) so that the text can be easily modified makes that process even more efficient. When teams do this, the proposal manager can do a simple comparison of the SOW requirements to catch any tweaks the customer may have made to the requirements, and then the teas text can update the text accordingly.

When you are responding to so many task orders, you really do need to have an agile response process. All team members need to have access to the proposal library, and they also need to be trained on how to search it. When only one team member has this capability, that person becomes a single point of failure.

That individual, though doing their best, ends up creating a slowdown in the process where critical information requests build up in the queue. And the even scarier situation is thinking about what would happen should this individual ever get sick, have a hard drive failure, or ever go on vacation.

Main IDIQ Workspace with Sub-Workspaces for Each Task Order Response 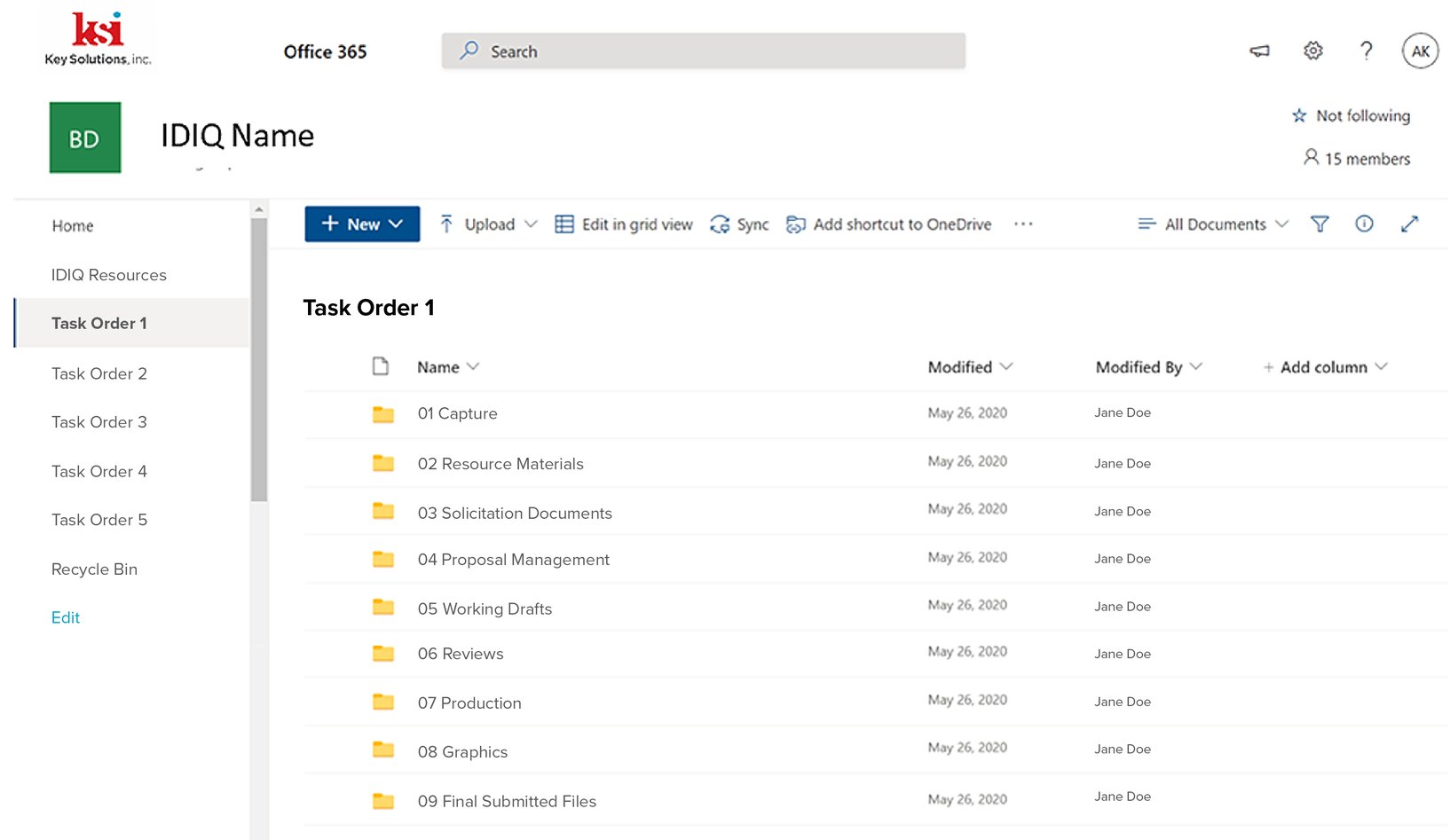 What’s more, when responding to so many RFPs at once, it’s so important for your past performance repositories and resume libraries to be easily searchable and kept current. You should also take care to maintain key reuse sections and updated them regularly. Having easy access to these materials makes the process so much easier and smoother.

Improve Your Own Desktop Publishing (DTP) Skills For Efficiency

Because the turns are so quick with task orders, it’s so much more efficient if the proposal lead can handle the DTP function.

This is a skillset that many of us who frequently work on strategic proposals have let go to the wayside. Very infrequently we are required to apply the styles of a document, modify those styles for the RFP font requirements, and spend time cleaning up a document. But when you’re juggling so many responses, and when the content comes in at the 11th hour, you just don’t have time to pass the document to a DTP specialist to format. When your task order proposals are submitted down to the wire—that’s a level of stress that just isn’t sustainable long term!

I’ve always encouraged my team members to strengthen their DTP capabilities because it just makes you a much more well-rounded proposal manager—and DTP abilities are definitely critical skills in the task order proposal world. Here are a couple of helpful links.

Since there is no room for error, organization, planning, and time management skills are even more critical when juggling requirements across multiple concurrent task orders. Also key is a solid proposal management infrastructure with strong reuse materials that are readily available and easily searchable. Finally, it’s so important to have a streamlined and agile proposal development process where the proposal lead can perform the DTP and document finalization will support the quicker turns necessary to support a high volume of responses.

Without these key resources and skillsets, teams will struggle to put together solid task order proposal responses while meeting frequent and competing deadlines.

This article was originally published on the Proposal Reflections Blog.

Ashley Kayes is the Director of the Quality and Performance Center of Excellence at Key Solutions. She has more than fourteen years of proposal development experience and is a Certified Professional with the Association of Proposal Management Professionals (APMP). Through her consulting work and writing, she enjoys helping professionals learn about proposal development best practices. Her love of teaching extends to sports, where she is a girls' gymnastics coach. 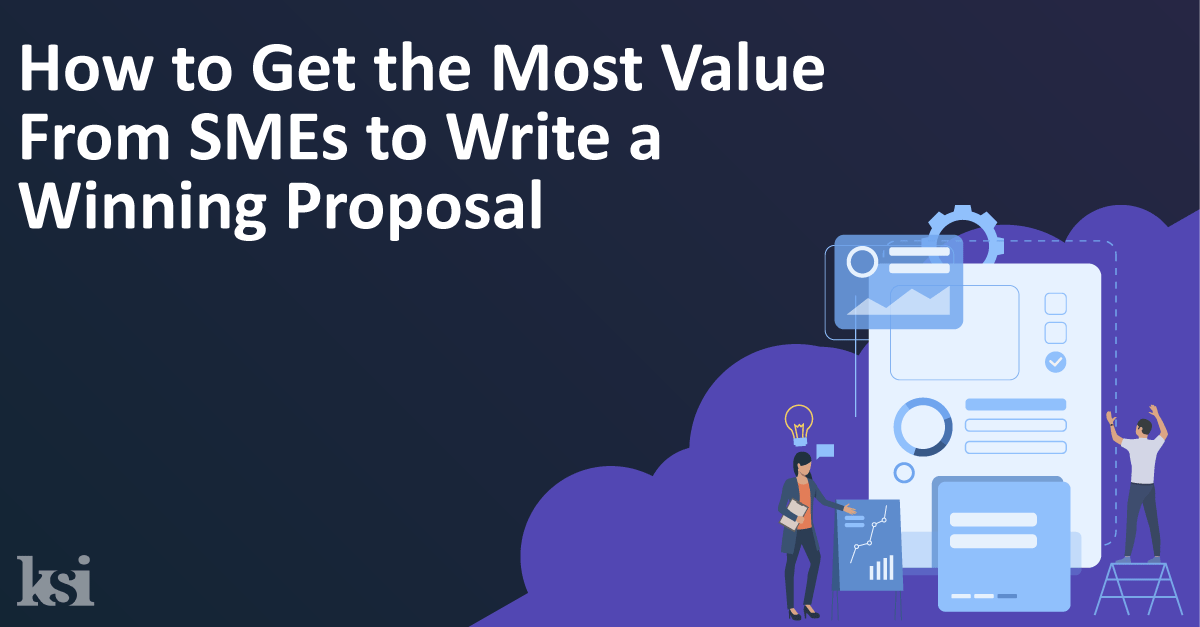